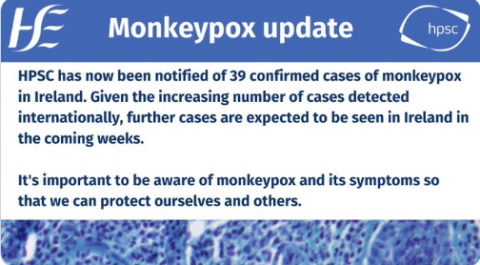 HPSC has now been notified of 39 confirmed cases of monkeypox in Ireland. Monkeypox Report. These cases are not unexpected following the presence of monkeypox cases in the UK and many European countries.

The cases in Ireland come after the reporting of more than 4,000 other confirmed cases of monkeypox in Europe, North America and many other countries worldwide over recent weeks https://monkeypoxreport.ecdc.europa.eu/. The vast majority of these cases do not have a travel link to a country where monkeypox is endemic. Many countries have reported that the cases are predominantly, but not exclusively, in men who self-identify as gay, bisexual or other men who have sex with men (gbMSM).

In addition to the multi-country outbreak that is affecting Ireland, there are ongoing monkeypox outbreaks in endemic areas https://www.who.int/emergencies/disease-outbreak-news/item/2022-DON396.

A multidisciplinary Incident Management Team was established by the HSE when the international alert was first raised and commenced activities to prepare for cases in Ireland. The IMT will continue to actively monitor this evolving international situation. To assist in Ireland’s response, monkeypox has been made a notifiable disease. This means that medical practitioners (and laboratories) are required to notify the local Medical Officer of Health/Director of Public Health of monkeypox cases in Ireland.

About monkeypox
Monkeypox is a rare disease that is caused by infection with monkeypox virus. The virus is found in some animal populations in remote parts of Central and West Africa, and in the past has caused occasional limited outbreaks in local communities and travellers. The cases being reported across multiple countries now are unusual because most of the cases do not have a link to travel to these parts of Africa.

There are two types of monkeypox: West African monkeypox and Congo Basin monkeypox. It is the milder, West African, type that is causing the current outbreak.

Monkeypox spreads through close contact, including contact with the skin rash of someone with monkeypox. People who closely interact with someone who is infectious are at greater risk for infection: this includes household members, sexual partners and healthcare workers. The risk of spread within the community in general, is very low.

The rash starts as raised red spots that quickly change into little blisters. It usually develops within 1 to 3 days of the start of the fever or other symptoms, but some people may only have a rash. Sometimes the rash first appears on the face and spreads to the mouth, palms of the hands and soles of the feet. However, following sexual contact, the rash may be found initially in the anogenital areas. In the recent cases seen internationally, systemic symptoms have not always been a feature, and rash in the anogenital area may be the main symptom.

The rash goes through different stages before finally forming scabs which later fall off.

Images of the different stages of the rash can be found on the HPSC website at the following link: www.hpsc.ie/a-z/zoonotic/monkeypox/factsheets

Treating Monkeypox:
Monkeypox infection is usually a self-limiting illness and most people recover within weeks, although severe illness can occur in people with very weak immune systems, pregnant women and in very small babies. Severe illness and death outside Africa are unlikely.

There is no medicine that can cure monkeypox. Treatment of monkeypox is mainly supportive. This involves treating any uncomfortable symptoms, such as pain or itch, that occur, keeping the patient warm, comfortable and relaxed, and making sure they get plenty of fluids. This allows the person’s own body defences to fight the infection.

Gay, bisexual and men who have sex with men (gbMSM):
Anyone, regardless of their sexuality, can get monkeypox. However, many of the cases in this multi-country outbreak are in men who self-identify as gay, bisexual or other men who have sex with men (gbMSM).The reason we are currently hearing more reports of cases of monkeypox in gbMSM communities may be because of positive health seeking behaviour in this community and increased awareness since this outbreak was alerted to the public and to healthcare workers across the world. Monkeypox rashes can resemble some sexually transmitted diseases, including herpes and syphilis, which may explain why many of the initial cases were picked up at sexual health clinics.

As the virus spreads through close contact, the HSE is advising those who self-identify as gbMSM (especially if they have undertaken international travel in the past month), to be alert to any unusual rashes or vesicular lesions on any part of their (or their partner’s) body, especially their genitalia. If they do notice any such changes, they should contact their local STI Clinic or their General Practitioner (GP) for advice.

Further information on monkeypox infection can be found on the HPSC website: https://www.hpsc.ie/a-z/zoonotic/monkeypox/